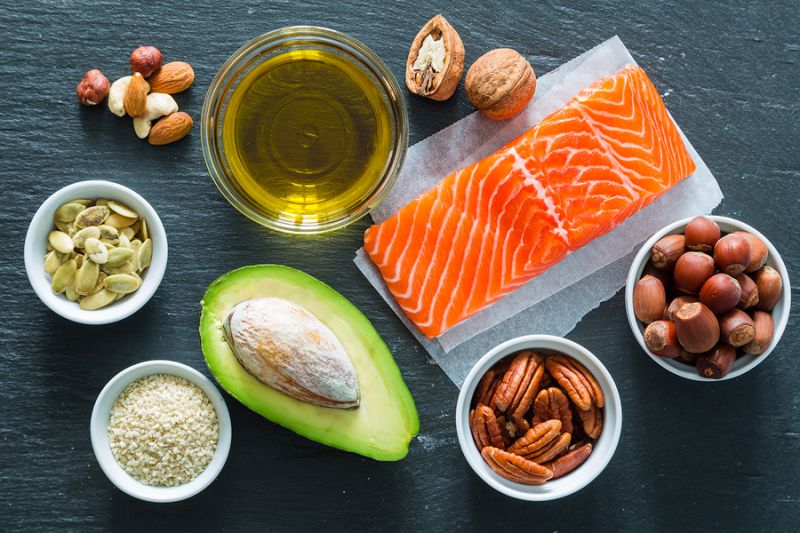 What should your Ketone levels be?

When starting a keto diet, pretty much everyone gets focused on their ketone levels. It makes sense.

They are concrete measurements of progress and most of us are goal oriented. But we can’t tell you how many people we’ve spoken to who wanted to give up because they weren’t where they thought they “should be” early on. So, let’s not get ahead of ourselves. Instead, let’s explore levels of ketosis with an eye on learning what they are and what they mean, so you can understand what optimal levels are based on your goals.

Understanding metabolic fuel use is essential to understanding ketones. When we have constantly high levels of insulin, a condition called insulin resistance, then we are not able to burn our fat for fuel.

This is important since ketones are only produced when the body is in a state of fat burning. This is because ketones are actually just pieces of “burned” fat.

How are ketones produced 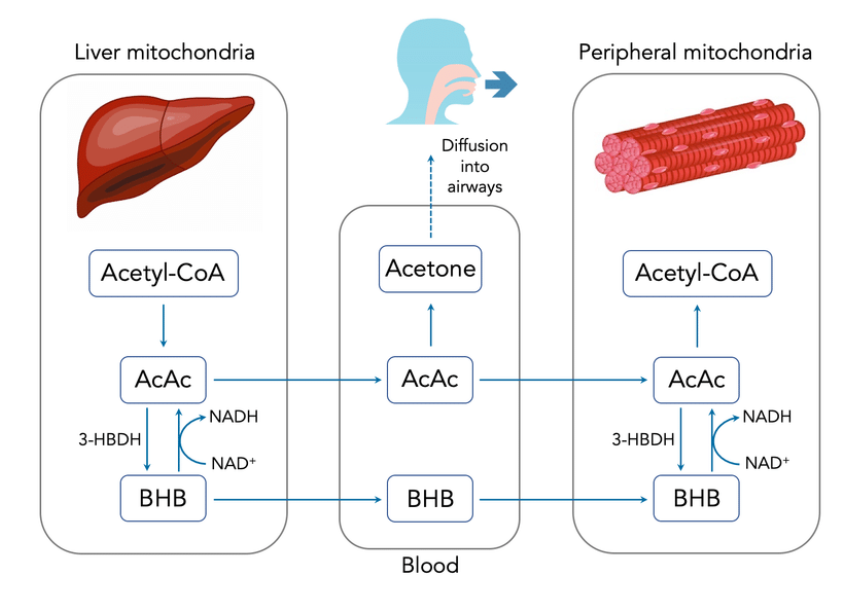 When insulin is low for an extended period of time, up to about 20 hours or so, the cells of the body, especially the liver cells in this case, can’t stop burning fat. Essentially, the cells are burning more fat than they need! Normally, a cell is only burning enough fuel to meet its needs. However, when insulin is low for a long period, the cell simply can’t stop burning fat, even after it’s met its energy needs. This is where ketones come in.

Ketones are produced from a fat-burning cell when the cell has both met all its metabolic needs and also can’t stop burning fat. But why produce ketones from this excess? One reason is that ketones are great fuel for cells that don’t burn fat, most especially neurons and other cells in the brain. By far, the brain is the largest consumer of ketones and begins greedily gobbling them up the moment they appear in the blood.

Also, ketones are a great way to remove excess energy. Remember, ketones are produced when a cell is burning excess fat, so it’s little surprise that ketones help with removing some of this excess. An oft-overlooked aspect of ketones is that they are caloric molecules. We always talk about the calories of fat or glucose, but ketones also have a caloric value that is very close to the caloric value of glucose. When ketones start to rise in the blood, as noted, they can be used for energy, but what isn’t used for energy is simply removed from the body.

First, the excess ketones (i.e., excess energy) is exhaled, just like the CO2 is. This is why people will note the unique smell on the breath of people who have been fasting or strictly adhering to a ketogenic diet. That smell is actually the ketones being blown out of the body.

Second, ketones are removed through the kidneys into the urine. This is why ketone urine strips are so often used to determine the amount of ketones in the body. But again–this is simply another avenue for removing ketones (i.e. excess energy) from the body.

In the end, an accurate view of ketones is that they’re a strong signal of fat burning–if you have ketones in your blood (or breath or urine!), you know you’re in fat-burning mode. Whether you get there through fasting or a low-carbohydrate diet, once insulin is low, fat burning starts and ketones are increased! 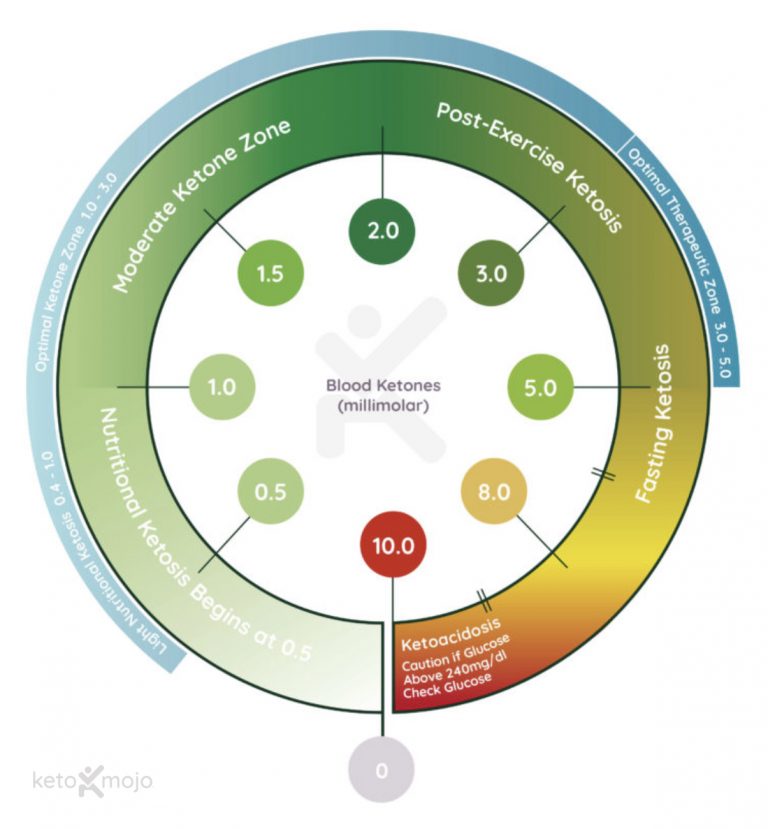 It is widely accepted that nutritional ketosis begins at concentration levels of 0.5 mmol/L. That means that the minute you cross that 0.5 threshold, you’re “in ketosis.” From there, nutritional ketosis is considered around 1.0 mmol/L, then becomes “optimal” 1.0 mmol/L through 3.0 mmol/L range. As long as you are burning fat any level is great indication of metabolic flexibility.

You are considered to be in ketosis when your ketone levels are above 0.5mmol/L.

What Should Your Ketone Level Be?

If your primary goal for integrating the ketogenic diet into your life is weight loss, achieving “light nutritional ketosis,” or 0.5 mmol/L-1.0 mmol/L, is a good starting point. From there, aim for “optimal ketosis,” which is when your ketone levels are between 1.0 mmol/L-3.0 mmol/L.

People looking to use the ketogenic diet for therapeutic benefits for medical conditions such as epilepsy, cancer, or endocrine and metabolic disorders, are generally directed to aim for much higher ketone levels—specifically in the 3.0 mmol/L -5.0 mmol/L range, or somewhere in between. People who are fasting or eat a much higher fat-to-protein ratio will look to levels in the 3.0 mmol/L-8.0 mmol/L range. But you don’t need to go there. The optimal ketosis range is called “optimal” for a reason, and it’s exactly where you’ll want be for weight-loss and general health purposes, and you’ll get there, in time, if you practice patience and get in the groove of eating a keto diet. 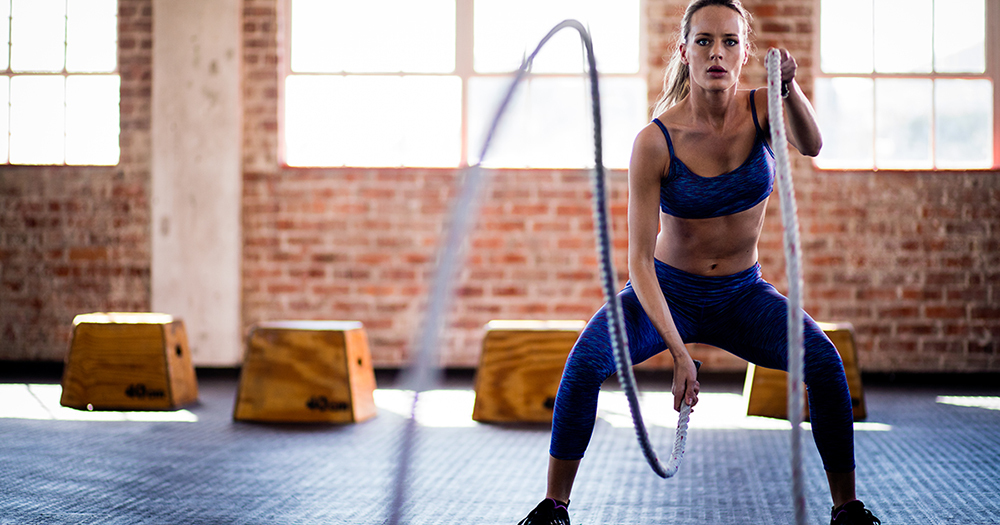 Does exercise affect ketone levels? Yes, but the effects differ from one person to the next. Still, generally speaking, anaerobic exercise (usually short duration and high intensity, like heavy weight training, sprinting, or jumping) will decrease circulating ketones, cause blood glucose to go up slightly, and cause ketones to temporarily go down. With aerobic exercise, such as swimming, walking, jogging, and cycling, you’ll generally notice an increase in circulating ketones. Does this mean you do not want to do anaerobic exercise while on a ketogenic diet? Absolutely not! Watching your ketone levels will help you understand how your body responds to various foods and activities, and knowing how your body responds will help you adjust your nutrition and food choices to properly fuel your body and maintain optimal ketone levels.

A Word of Warning

No matter the goal, no one should aim for the orange or red zones. They’re nearly impossible to achieve anyway and don’t increase the diet’s benefits.

The only people who should be concerned about approaching them are type 1 diabetics, because they face the potential of producing a diabetic complication called ketoacidosis, a serious condition that requires urgent medical attention. For them, the reward may not be worth the risk, which is why we recommend people with type 1 diabetes develop a diet plan with their care provider.